the essential The lava flow of the Cumbre Vieja volcano, which erupted on Sunday in the Canaries, was only advancing slowly on Wednesday afternoon, but the concern is growing on a cloud of sulfur dioxide heading towards the Mediterranean…

The eruption of the volcano Cumbre Viejae on one of the islands of the archipelago Spanish Canary Islands, La Palma, last Sunday was a shock for this very touristy island. This volcano still monitored – since the end of the years 1971, seismic activity has been detected under the volcano – was, in fact, asleep since 27 years, the last eruption dating back to 11 November 1971 .

To read also: Canary Islands: why the Cumbre Vieja volcano woke up

This is to say the surprise that was that of the inhabitants, some of whom had only a few minutes to evacuate their homes according to the accounts. Like the seven previous eruptions seen since the Spanish colonization of the island in the 15th century, Sunday’s erupted with tephra fallout (the solid rock fragments expelled into the air) and a lava flow.

According to the latest report provided by the European system of geospatial measurements Copernicus, 105 hectares of land and 320 buildings were destroyed by lava, including many homes. In total, Wednesday evening, 6 84 people had been evacuated since the start of the eruption, which has not, so far, been dead or injured. Among them were 320 tourists who were transferred to Tenerife , another island in the archipelago. 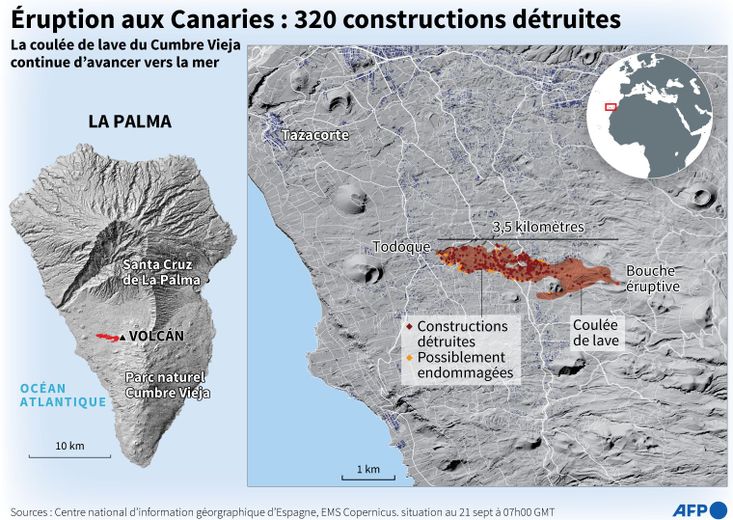 The lava flow slows down

The damage caused by the eruption would already exceed 320 million euros according to initial estimates. Faced with this situation, the firefighters tried to deflect the lava flow of a good ten meters high entering the village of Todoque, one of those evacuated by the authorities and the last locality before the coast, located about 2 km as the crow flies. In vain. “Faced with the advancing lava we can’t do anything ”, conceded the president of the Canary Islands region, Ángel Víctor Torres, who hopes that the lava will stop on its own, its slowdown having accentuated to 1 meter per hour

On the archipelago, everyone hopes that the lava will not reach the Atlantic Ocean, which would cause toxic gas emissions and projections.

Camilla Cabello: 5 things to know about the new bomba latina

No Grand Slam for “Djoko”, beaten by Medvedev in the final of the US Open

How will Netflix change its ranking of the most watched series?