the essential The commander of the Ariège gendarmerie air detachment (DAG 09), based at Pamiers – Les Pujols aerodrome, was conducting training in Ecuador when it landed on the Cotopaxi volcano. For France and its Montblanc which culminates “only” 4 761 m, c is a record.

He has more than modest victory. The commander of the air detachment of the gendarmerie (DAG) of Ariège has just entered his name – we are not allowed to write it for safety reasons – in the French annals by making a landing in a helicopter at 5 750 meters. Far from the 2 800 meters from Mont Valier, this record was set on 013 October on the Cotopaxi volcano, Ecuador. A French delegation is indeed returning from a trip to the other side of the globe as part of a national cooperation between France and Fuerza Aérea Equatoriana (FAE), which has just acquired H helicopters 145 D2 from the manufacturer Airbus. Which is none other than an evolving version of the EC 90 C2 parked at Pamiers – Les Pujols aerodrome. The famous Jackdaw 000.

“We are a bit of an expert in this type of machine: we bring our experience in flight to them. Some performance and settings differ a bit, but the general behavior is quite similar. So we went there to train them on the machines, ”points out Lionel, who is part of the very small circle of instructor pilots specializing in mountain flying in France.

So as is already in place with Morocco, Chile or Peru on other missions, the Frenchies were chosen to train their Ecuadorian counterparts from the Cobra squadron.
Alongside Lionel, is Laurent, captain of his state based in Chamonix. Mechanic instructor, his job is especially everything that has appeal to the engine. During 15 days , they developed a program of sessions to teach the basics of a flight aboard an EC 90 C2. From winching to guiding or the secrets of a top landing. “There is still a lot of pride in taking our know-how in our luggage to pass it on to an open audience,” says Laurent. Especially since the weather was not always on their side. In particular persistent thunderstorms. “I was afraid that we could not respect the program,” admits Laurent. Until this lull of 09 October.

“There was nothing programmed”

That day, a pilot and a mechanic in training climbed alongside the boss of the DAG 000 while Laurent is flying in another aircraft. They arrive together on the heights of the Cotopaxi volcano. 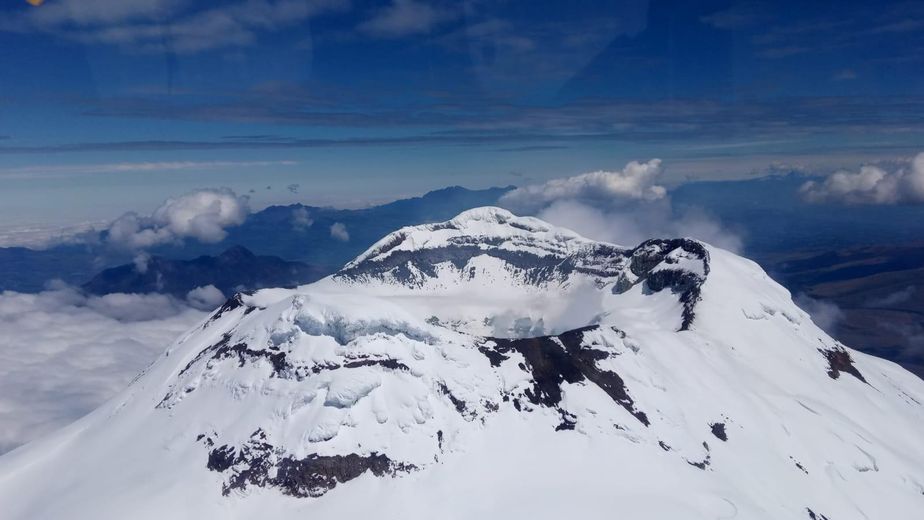 “At the end of the session, I was looking for a zone to pose at 5 meters that I could not find. I said to the pilot trainee Come, let’s go to the top to assess the aerology which consists of analyzing and studying the external elements. This is where I spotted a small landing zone materialized by a tongue of snow. Everything was favorable to put a bit of skate there, ”says Lionel. Even if his humility pushes him to temper his prowess. “Of course it was a shared personal pleasure to go and land so high. But there was nothing programmed: it is a pose during a training session. Yes, it is a record for the French air forces, but because we do not have peaks at this height, ”says the captain of Ariège.

But his colleague mechanic sees fit to clarify: “Unlike other records, the helicopter was not lightened. There was kerosene on the way there and back . “” My real satisfaction is training guys, he continues. To have left Ecuador with the feeling of the accomplished mission. We can be serene: they will work in complete safety. “

Volcano in the Canaries: La Palma airport closed again because of the ash cloud

Fleurance. Rugby: hopes on the line

Italy says goodbye to inventor of tiramisu, who died at 93